"In actual fact, a place is never 'chosen' by man; it is merely discovered by him; in other words, the sacred space in some ways or another reveals itself to him."

"It was sunset when I began to sweep the area that was to become the Silver Square. A breezy and peaceful environment. People form the street above called down into the recessed lot, their voices bellowing, 'Why are you sweeping?' The echoing was dreamlike, the sound lilting. My response, 'I am preparing to paint," was lost in the wind.

The Silver Square has been painted over an existing concrete foundation that is set on a slight angle, distinguishing itself in the space. The shape of the Silver Square (which is actually a 40' by 70' rectangle) corresponds in architecture to the Golden Mean - the perfect proportion - visually the most satisfying shape. I found it irresistible. Painting this shape silver was, for me, doing something that would be both dynamic and subtle, mutable, questionable.

The Silver Square exists in a no-man's land - one block sqaure - located between the Standard Oil Building and the Illinois Center complex, just east of the 'loop' in downtown Chicago. It is on quite possibly the most expensive and illusive piece of land in the city. This empty lot and the concrete foundation are a familiar site to the many people who occupy and/or work in the surrounding buildings that overlook the area. The Silver Square was an attempt to enhance this environment by restoring a shape.

At approximately 2:00 in the afternoon when the sun is at its brightest the Square lights up with reflection, mimicking the lake. It is a spectacular experience to 'walk on water.' Another point in the day the Carrara white marble eighty-storied Standard Oil Building causes an 'eclipse of the square' by blocking out the sun. In sweeping geometrical stages over the period of one hour - opening the space to light again. 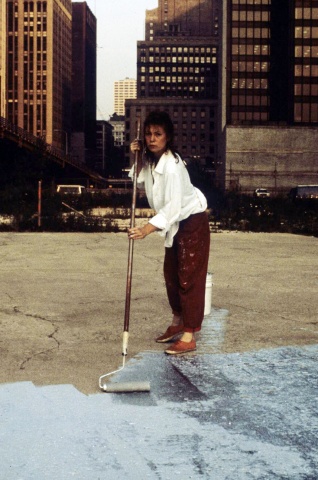 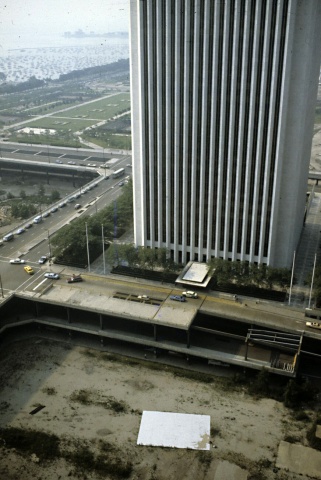